Jordan Bateman took me to task a bit here for my comments on the hotel room I stayed in at UBCM. I wish he had included the full text of my post - which talked of the great value of going to UBCM.

I think Jordan wisely turns off comments on his blog posts after a few days, but here is my comment further on his post, if I could post it:

Jordan, $125 for a hotel room at this year's UBCM is great value for the Kamloops taxpayer. No, I would not spend as much if I was paying my own dime. But, what I neglected to say is that I would not have worked as hard either. After a long day learning, lobbying, and networking - a good sleep in a good bed in a hotel a block away from the conference centre was very prudent. And entirely appropriate.

Here are some photos from the UBCM conference: 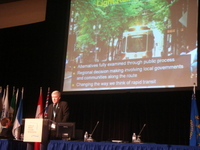 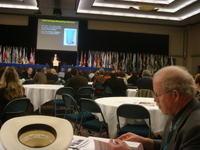 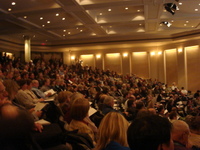 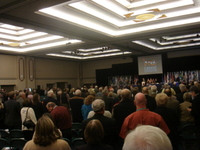 Panel of Provincial Ministers on social and educational side.

From the youth presentation at yesterday's large city UBCM forum.

Saanich has built a stand alone teen centre and staffs many programs that engage youth in their community. They sound to have a great mentorship and youth development program.

Vancouver youth have helped their city hall train planning staff on how to talk to youth. I must admit that sometimes I find it challenging talking to youth about issues - I want to make it relevant and interesting to them, but don't quite know if I am resonating. So, Vancouver has a great program. Also very notable and challenging are Vancouver efforts that bring youth from vastly different situations  (homeless youth, youth from wealthier neighborhoods, etc) around the same table to work on projects.

I am staying in a very nice hotel - rate is about $125 a night I think. The meals are good. I would not stay in such a nice place if I was paying my own way but I would probably still eat as well, or better.

The point, though, is that this conference has been of enormous value to the citizens of Kamloops. For three reasons:

The BC Transit board and senior management held a transit forum this evening at UBCM. Very informative. At the end of the forum, we broke into smaller groups with BC Transit muckymucks and shared some ideas and concerns. There is a lot of demand, it seemed from the discussions, for expanded transit services, even in very rural parts of the province. I shared some of the concerns people in our community have shared with me - hours of service, optimization of scheduling so that buses are more staggered, for example.  I also brought up the idea of enhanced creative marketing of transit to people who currently don't use transit, but could benefit from doing so. The only time I see the bus promoted is on the bus itself. We need take transit promotion to the next level. This idea did not seem to take hold in my little group, but its one that I personally think is golden.

BC Transit managers gave mini reports on the current state of the organization. The Chair of the BC Transit board started by outlining 4 common points that British Columbians raise about transit:

Of course this wasn't all that was said, but these are the points that stood out and that I recorded.

At the UBCM Conference in Victoria

Arrived in Victoria for my first UBCM conference. Representing the people of Kamloops here, I can sense real opportunity.  The Kamloops contingent have meetings scheduled with:

I was having trouble with speaking clearly at  this Tuesday's council meeting. Got quoted in the paper as echoing Peter Milobar's feelings of not wanting a "radioactive" business in the Kamloops area. I am, by contrast I guess, willing to wait for further information. I spoke forcefully during the debate, and this might have obscured my real goal which was to outline some of the questions I had about the project.

The official city web site has a huge amount of useful information.

Here for example is a list of all the major construction projects planned this year.

I want to thank Susan Dixon, drug and alcohol prevention and intervention coordinator with the school district, for an invite to an advisory meeting yesterday.

The meeting was incredibly pleasing to me, because it focused on the root causes of a lot of the bad stuff we see in Kamloops today. And it spoke to trying to address problems at the early stages.

A lot of the work Susan, and her colleague Angela Lawrence, do are encapsulated on or linked to on this rather extensive web page.

They can be contacted for advice or guidance on the issue of young people, addictions, and negative behaviours.

Why we need to look at efficiency within City Hall

I hear it reasonably often - too often actually. The City is inefficient.

I don't know this to be true. Seems to me, so far in my term, that there are a lot of things City staff do incredibly well. There are, of course, other tasks that don't get done all too well - much like any organization.

However, any local government is and should be held to a much higher standard than most other organizations. And we should be looking at every means possible to measure how time efficient and cost effective we are in delivering services to the community. People need to be able to trust what we are doing.

And we need to actively communicating how we are doing.

Here is a little video diary on the same subject: