The Challenges of Going Green...

So it seems the issue with most of this green stuff is that it is so new to almost everybody and we are still looking for best practices. City staff and council still needs to grapple with what will work well in our local Kamloops context.

In my view, we need to go green,  all of us, faster, because of the scientific consensus of the perils if we don't - the question is how?

I am pleased to say city council has approved spending resources on putting on a council / senior staff workshop so we can get some top flight education and advice on the green way forward.

And, by the way, we approved the 21 story tower development. 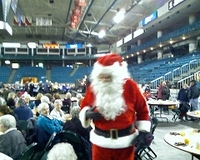 A break in a Council meeting. A small gathering the Mayor's office. The Mayor asks Peter Milobar and me "so, which one of you is playing Santa tonight at the seniors light tour". I reply, "thats your job, your jollyness".  The  Mayor replies "look, I am too short and the pillow falls out too easy". Milobar quickly demurs, saying his put his time in already, having been Santa for various Christmas parties. That Milobar doesn't miss a beat, while I stand a litle stunned and obviously, so far, silent - as I watch all eyes turn towards me.

I am between an candycane and a gingerbread latte. And I hear myself say "Ok, I'll do it".

WHAT? I have never ever conceived that I would ever play Santa. What a responsibility. I have never been a costume kind of guy. And, besides, isn't Santa white?

The Mayor turns his door, and I take the hallowed suit off the hook. I take it home. I tell my wife. It took a while to get her to stop the guffaws.

Only issue, I don't figure out the white stripe on the coat should be in front, and not down my back. Turns out this a relatively big issue.

I enter the arena from an ice level with my elves - Terry and Tina. Almost 800 seniors are already sitting around tables, listening the Old Time Fiddlers play classic Christmas tunes. They turn, they definitely notice the stripe placement, but they are still very friendly.

My other elf - named Pat - helped me navigate the tables - the oldest people in the room seemed the happiest to see this Santa. The excitement in their eyes made it all truly worthwhile. Surprisingly, some people asked Santa if his dad was "the doctor".

I was really glad to be part of this great Kamloops tradition.

PS...Thanks to my techie elf John, who took the above photo with his fancy cell phone.

Council approved the provisional draft 2007 budget. I think this was so we had the actual, rather than the projected budget figures for 2006. We authorized public hearings for rezonings to allow the following: an appliance store in a light industrial / technology park area of McGill Road and the construction of a duplex in a single family residential zone.

We approved the expenditure of $20000 to study the suitability of Ord Rd as a designated dangerous goods route. We approved a policy for video surveillance of civic property. I tried to tighten up the policy through an amendment to ensure video data was erased after 5 weeks. I was not successful - policy still reads "approximately 2 to 4 weeks". The use of the word "approximately" worries me still, but I still felt the policy is a good one overall, so I voted to approve.

Byron McCorkell, city parks and rec director, presented a top notch report on introducing more fairness into how the city charges for community facilities. This will mean increases for users, but also means that taxpayer dollars will focus on where the greatest need exists - youth programs, programs for people with lower incomes, introductory programs. The new structure attempts to be fair to all, but also incorporates flexibility to circumstances, as they arise. The report passed unanimously.

City staff also got Council's nod for a list of funding priorities that the city will apply for under the federal government's municipal rural infrastructure fund. The list of priorities: Noble Creek and North Westsyde water system improvments, Airport improvements, curbside recycling, slo-pitch complex, and an integrated community sustainability plan.

We heard from the president of the TRU student society, Terry Monteleone, and gave broad support to any and all attempts to make post secondary education more accessible. Trucking industry reps Chris Goss, Mic Bradshaw, and Paul Landry shared why the industry in general supports designating Ord Rd a dangerous good routes.

In response to a letter from the Mayor of Port Alberni, we supported their request that the provincial government to buy the Martin Mars water bombers that are currently on sale, to ensure that the water bombers continue long service fighting forest fires in BC.

And, in a response to another complaint about the city owned parking lot behind the Scoopz ice cream parlour in Lorne Street, city staff were asked to revisit the issue of lighting the lot.

I would be interested in hearing more from Nancy on her views. If she has a strong argument, we need to hear it. From all the credible, developed arguments I can find, global warming is very real and it is human caused.

The Search for Henry Vandenberghe's killer(s)

At a wonderfully warm and poignant commemoration of Henry Vandenberghe's life, David Ross said that the RCMP told him that the trail is warm.

I didn't quite appreciate until this event what a huge gap Henry's untimely death will leave in the community. In the arts world, he was quiet and unassuming, but he was a giant.

I imagine it is pretty obvious to everyone who reads the paper that things ain't exactly going swimmingly between Council as a whole and our MP. I share my Council colleagues' concerns about getting a quick response to our request for added pine beetle funding. The Mayor joined his counterpoints in Kelowna and Prince George to press the federal government for much needed dollars. And I feel that has certainly created further "legs" for the issue.

I feel our Mayor is doing great work on a difficult issue.

But, I also think we have to work with Betty Hinton in a way that suits her style. I have a great deal of respect for Betty, especially with regards to the passionate advocacy work she has done on behalf of veterans. When she says we can pick up the phone instead of going through the media, I believe her.  I have faith that she will try her best to help secure the pine beetle funding for Kamloops.

I believe it might be time for the Mayor and the MP to take turns buying a monthly lunch.

It is painful when you hear the relationship being described as "childish" by folks you meet out and about, when in actuality, all involved are very competent and interested in doing the right thing by our constituents.

Surely, that is the most important thing  - helping our constituents.

Would be most interested in any comments on the issue.

That's pretty serious stuff. The look of the land will drastically change. We will be a much more barren region. Thats not the most serious stuff, though. As the Pine Beetle continues the relentless onslaught, consider the following, for example:

Of course, from all accounts I have heard, there is nothing we can do to stop the Pine Beetle. And, before we can really focus the issues I have outlined above, we need to get infected trees down, mainly for safety reasons. This is going to be expensive.

So, as many of you will know, City Staff are working their butts off trying to get infected trees down. And, this past Tuesday, Council heard about a program that will help private landowners transport cut trees from their property line. The trees will then be chipped and utilized by Weyerhaeuser for power generation.

This is where this file sits now....

My grandmother, my last grandparent, is close to death's door. I am going to India on boxing day for a short trip to see her, I hope.

I don't know why - I guess largely to avoid the inevitable - I seem to be focusing on the day and a half I am spending in London on the way back. I am really looking forward to that 36 or so hours. I almost have a London fetish.

Why We Didn't Listen to Neighborhoods on November 21st

I've always been disappointed when Council, present or past, has gone again the wishes of neighborhoods, as expressed by those who take the time to express their opinion.

Why did I do this?

First, I believe that city staff evaluate all proposals very carefully and they had recommended approval of these projects.

But, in my view, in a controversial public hearing, city staff recommendations are not the basis on which most councillors vote.

On the social housing project: