A Painful Resignation from the Social Planning Council...

I've submitted a painful resignation today as the city council representative on the city social planning council. I remain committed to productively contribute to the betterment of the social fabric of our community.

I have made some mistakes with my involvement with the social planning council - not ones I feel of intent, but ignorance. But big mistakes nonetheless and ones I need to take responsibility for.

I also feel that I should publicly explain what I feel happened, apologize, and also share what I have learnt, I think, so that I hopefully don't make such mistakes again.

First, a sincere apology. I understand that many social planning council members feel that I have sometimes (often?) dominate conversations at meetings. I should have been much more mindful of this, as a member of city council. I fervently believe the social planning council needs to be a place for the community to have its voice, and I feel awful that I have sucked oxygen out of the room.

There's another apology I have made, and the incident makes me feel even worse. I came into the city hall on Tuesday, Feb 26th, for the regular council day, and the Mayor asked me if I would be willing to sit down with Ray Jolicoeur and Randy Diehl to discuss my conduct at social planning council. I agreed, but I guess I was a little taken aback.

After the meeting, I was pretty emotional. I took Ray by the arm, and asked him why he had not just come talk to me one on one. I said "don't make me have to go through that again" or something pretty close. This was totally the wrong thing to do, and Ray took it as a threat. I would probably have taken it the same way, if I had been Ray. I totally did not mean to threaten, but I needed to be a lot more careful and professional.

I have met with Ray and personally apologized for what I have said and did to him. He has accepted that apology. I have a great respect for Ray and am thankful for his dedication to helping improve our community and to tackling very complex issues.

As many likely now, I have become quite passionate about the issues we discuss at social planning. Its absolutely critical that we bring the social lens to all city hall activities. I have tried to be an effective advocate for people at risk and in risk in Kamloops. I don't want the work of the social planning council compromised in any way.

I tried to figure a way I could stay on social planning committee, and be a better member. But, at this point, I don't feel this is possible. I need to prove that I have learned these painful and important lessons in many other forums. I commit to doing that and I hope people will hold me accountable to this committment.

What I have learned from this:

1.  It is critically important that I, as a member of council, do not take time and energy away from valuable citizen contributions. At social planning council, it is now pretty apparent to me that I was taking time away from social planning members by talking more than I really should have, and not listening enough. I have served on a number of different committees at city hall and in the community, every group is different. I need to do a much better job assessing the balance between talking and listening.

2.   Emotional situations have to be handled with great care. Sometimes you say things that you shouldn't. I did not intend to be threatening to Ray Jolicoeur, but I should have realized that saying what I said could be taken in that way. Ray is a friend of mine, and I should have taken a deep breath, been much more professional and business like, and accepted that he dealt with an very uncomfortable situation the best way he knew how.

We are leaders in Earth Hour commitments...tomorrow

One in 606 Canadians have committed to participate in tomorrow's "earth hour' compared to one in 5437 Americans. A little friendly competition - go Canada!

What is Earth Hour? Well, if you turn off as many lights as you can tomorrow between 8pm and 9pm , as well as any other powered device or appliance - yo will be joining tens of thousands other folks in promoting an ethic of conversation.

Violence in Tibet - our community response?

China's state newspaper today called for the Chinese government to "resolutely crush" protests in Tibet and protests by Tibetan independence advocates in China. 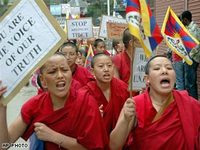 Shouldn't our Mayor take a message (even a quiet one) of non violence, human right and democracy on his next visit. I really truly hope he will consider it.

It's not all about business.

I have been thinking about how I might have answered the inevitable media questions the Mayor was posed this past week about the Maclean's magazine rankings that ranked Kamloops the 12th most dangerous Canadian city in 2006.

It's a hard issue to put into a soundbyte. Mayor Terry Lake and local RCMP Inspector Yves Lacasse, in media reports, defended Kamloops safe reputation. The Mayor mentioned that in 2006 we had an uncommon amount of homicides.

It's understandable that they took this approach to the questions. I also think Kamloops, for most people, is a safe community.

I might also add that we should be looking at reasons why Kamloops had a uncommonly high crime rate in 2006, and see if there any steps we can take to help prevent such circumstances in the future.

The RCMP's new prolific offender program, the various initiatives attempting to help marginalized and at risk people in our community, and above all better cooperation between diverse community partners should also help reduce crime in Kamloops.

I found the Maclean's article that accompanied the rankings quite nuanced and interesting.  Here are some quotes:

"For all that, these are hardly cities under siege. The worst of the crime is often visited upon the most vulnerable, those in the poorest postal codes. These are gathering places for the addicted, the psychiatrically disabled, and those who prey upon them."

"Aboriginal population, which reached 1.2 million in 2006, is dramatically younger. Its median age is 27, compared to 40 for the Canadian population as a whole. Younger people commit substantially more crimes, regardless of race, says Melchers. The lack of strong Aboriginal cultural and family roots in urban centres make the young especially vulnerable to the allure of gangs, he says. "They head up a whole series of factors of risk: no single-family housing, poor parental guardianship, substance abuse issues, alcohol issues, histories of family violence." Melchers says. "When you sum it all up, the tragedy has a huge impact." The gross overrepresentation of Aboriginals in custody is both an indicator of the problem and part of the reason it is perpetuated. In Saskatchewan, Aboriginal youth represent 75 to 90 per cent of all youth in open and closed custody, estimates a 2003 report by the Federation of Saskatchewan Indian Nations (FSIN). Often, they are both victimizer and victim. Nationally, Aboriginal people are three times more likely than non-Aboriginals to be assaulted, sexually assaulted or robbed. They are seven times more likely to be victims of homicide — and 10 times more likely to be charged with homicide. "

After hearing a lot of concerns from neighbors, hearing from the applicants, and much discussion, your council decided to allow a subdivision of a lot at 2532 Glenview Ave, adding a restriction that the height of the house on the lot be no more than 1.5 stories.

Council also approved the creation of a panhandle lot from 880 Serle Rd, adding a restriction that the driveway be paved with a load bearing hard surface instead simply being gravel or dirt.

Council approved a reconsideration of a tweaked proposal for legalizing a second kitchen at 1878 Parkhill Drive (denied last week). The applicant proposed to also add a condition that he would widen his driveway to allow for an extra parking stall. The proposal was then approved.

Council, through approval of public hearings, asked for public input on the following proposals:

Through a notice to neighbors of an intent to issue a development variance permit, we also asked for public input on larger sign size for the Little Red Store at 3010 Westsyde Road.
We issued a development permit for a 13 unit townhouse project at 425, 433, and 438 Waddington Dr.  By a split 5-4 vote, we approved a agricultural land reserve exclusion application for 6794 Barnhartvale Rd to proceed to the agricultural land commission.

Council heard delegations from Councillor John O Fee with an airport expansion update, Mr. Peter Murtrie with an update on the North Shore BIA, Ms Katerina Bozanich with a request for curbside recycling for multi family housing, and Ms Bonnie Klohn asking that council consider allowing the raising of chickens on less than one acre subject to specific conditions and regulations.

Council responded to a written request from the North Shore BIA to reconsider Ord Rd as a dangerous goods route by outlining the process of decisionmaking thus far. In response to a letter from Mr Dave Snidal, chairman, Grasslands Strata, council asked that the issue of dust concerns arising from development in Bachelor Drive / Grasslands Blvd area be forwarded to city hall's property use inspector.

The City of Kamloops has helped the United Way create Access Kamloops, a new online and print directory of a multitude of different services and organizations in the community  -  I want to especially congratulate long time blog participant here and my friend Skylark Disraeli, who has been a driving force promoting the value of a consistently updated community directory, and who worked with the United Way folks to put Access Kamloops together.

You can provide feedback on the directory here

Photos from Council Tour of Tranquille

A few weeks back, city council took a tour of the Tranquille farm proposed development property. I took some photos, and am hoping these might give folks who have not the chance to visit a sense of the site now.

Here is the photo album.

We will be deciding on the proposed land uses this upcoming Tues, 7pm, at city hall.

Wrestling the Email Beast Down (For Now)

This will hopefully allow me to further improve my email response times!

Kamloops Chapter of the BC Sustainable Energy Association is following the huge success of the Kamloops Energy Fair last year with another one, to be held on May 25th 2008 at the McArthur Island Sports Centre.

A great opportunity for those with greener products.