I discovered Kirsten Mason's comprehensive blog on Kamloops Real Estate a little while ago and want to recommend it to one and allow. Useful information, consistently updated, and well designed.

Make sense these folks were right outside the front doors, basking in a beautiful day. Solar domestic hot water also makes so much sense. In addition, Sun Solutions offers a combo system that can heat floors, radiators, and such:

John O'Fee is joking, I hope

In Councillor John O'Fee's latest "Council Comments" Column, he focuses on the differing elevations in Kamloops and the challenges this fact presents to providing and maintaining public infrastructure and services.  I've heard John make this argument quite a bit, especially around city budget time when all the different expenses of running city hall operations are discussed, debated, and ultimately decided.

And I don't think this is a bad argument. I would simply add that city councillors would also be wise to make sure to ensure that, even with our geographic challenges, city hall still does everything it can to keep costs down. This would make John's argument even better, in my humble opinion.

Now, the part where I hope he has joking. It's the very last sentence of his column that has me hoping. Here is the context:

If you are wondering why Calgary seems to cool off so much at night, consider this.

Even at the top of Aberdeen you are still about 150 metres below the elevation of downtown Calgary.

A hike to the top of Mount Peter (the higher peak about behind Mount Paul) gets you to the elevation of the Saddledome.

I'm glad we don't have to pump our water to that height.

At least not yet.

Now, I am looking out my window onto Mount Peter as I type this, and its hard for anyone to imagine residential development up that slope. But, what really worries me is potential development pressure for more sprawl in Kamloops. I really hope that Kamloopsians don't allow anymore development that unecessarily increase our greenhouse gas emissions, especially in light of new peer reviewed research on climate change like this.

You can find Councillor John O'Fee's column most Mondays in the Kamloops Daily News. Always good food for thought.

Losing TRU's Cindy McLeod to Royal Roads University will be a blow to the community. As head of TRU World, Cindy oversaw a huge increase in TRU's international student population. These 1000+ students from 60+ countries around the planet have really added something valuable to Kamloops.

I wish Cindy well with her new position and in her new community, Victoria BC.

TRU President Kathleen Scherf is keen to keep growing international student enrollment. They will have big shoes to fill, looking for someone to lead up the charge.

RCMP Video Tour of Seized Kamloops Crack House...and a tragic story behind it all.

From a CTV BC story,    I learnt of this RCMP video of a crack house seized in Kamloops.

As usual, a incisive behind the scenes column by Robert Koopmans on the tragic, complex story behind this awful drug house.

A certain report on a recent City Council agenda caught my attention. This report may only be about a single sign proposal, but this underestimates how controversial this report might become. This particular sign raises many important issues. I hope it provokes a meaty community conversation.

The proposed sign is a standalone video display sign for our very popular Tournament Capital Centre (TCC). It would be placed along McGill Road and is 3 times taller and 5 times bigger overall than the maximum sign sizes currently allowed in Kamloops. Our current city bylaws also prohibit video displays on signs. 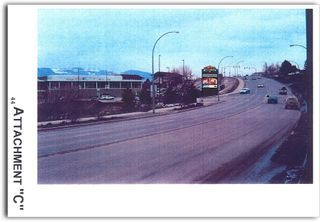 City Parks and Recreation Director Byron McCorkell would like to be able to better promote events happening at the TCC. Additionally, on the sign, there would be recognition of corporate sponsors of events at the TCC.

The first issue that came to mind for me about the sign was whether, in these economic times, taxpayers should be spending $24 000 for sign related road safety measures, such as a new median. The sign itself will cost $130 000, which comes from a provincial government grant. 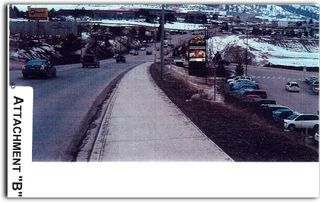 The Development and Engineering Services department raised a couple of other issues. The first was traffic safety, as video display signs have been known to increase the level of traffic accidents as drivers take their attention off the road. The second was a potential increase in sign pollution. If City Hall has allowed itself to have a much larger sign than currently allowed,  a sign with video and animation, there will likely be others who will push to be allowed these features as well. The City has tried to address those concerns. It will be up to concerned citizens to let them know if they have succeeded.

At last week's Kamloops Energy Fair, I spoke with Bill Johnson, from Amerispec Home Inspections. Bill is certified to conduct the EcoEnergy home evualation, which is the first step to qualify for the Federal Government's EcoEnergy retrofit grants for homes.

Kudos to My MP Cathy McLeod..she may need our support now! I want add my congratulations and thanks to Kamloops MP Cathy McLeod for being honest and forthright about our dislike of her own party's attack ads. All parties have engaged in this behaviour, but most politicians keep any displeasure about their own party's negative campaigns to themselves.

I would imagine people within the Conservative Party have come down on her about her comments. I think she might need our support. Always a good idea to write to the Prime Minister and the Conservative Party if you feel Cathy made the right move, and that she actually built more trust with her constituents through her actions.

The contact info page on the Conservative Party web page may be a good place to start.

Here is the contact emails and some phone numbers for members of the Conservative Party national council.

Venture Kamloops is the Kamloops economic development agency. Completely funded by city taxpayers, the agency maintains an arms length relationship from city council. In effect, Venture Kamloops does not need council approval of its work plan or activities.

I have a lot of time for Chris Ortner, the President of Venture Kamloops. His board will have a quite as task in the next months. They are in the process of charting a new direction, hiring a new executive director, and trying to be even more effective.

So, if you are looking for an exciting and challenging position in economic development, here is the job description.

Electric Scooters and Bikes in Kamloops...

The cost of gas is again rising. Transportation forms the biggest portion of our provincial greenhouse gas emissions. Transit is an alternative. Electric cars are still a way off. Your own two feet are ideal, but they can only can carry you so far. Cycling seems ideal, but we live in a pretty hilly town.

That's why I am seriously consider purchasing an electric bike or scooter. The Commuter Scooter Store in Kamloops are our local specialists. I caught up with owner Angela, at the Kamloops Energy Fair and recorded this short video with her: