Doesn't Take Much to Put Face(s) on Homelessness...

I'm quite ashamed to admit that it took me a long while, as an advocate for the homeless, to actually get to know some of our homeless neighbours in Kamloops.

I sat in many a meeting about homelessness before I actually started to develop some relationships with homeless people.

Last winter, I volunteered for the Out of the Cold shelter for the first time and got a chance to meet a few of the "guests" in a relatively relaxed setting. It was extremely easy to volunteer.

My heart broke quite a few times over those few evenings. I saw human beings with such sadness, with so many complex, difficult issues. Things I really didn't want to see at all. I knew Out of the Cold was just a bandaid, but I also knew, a very important band-aid.

But, here's what happened this past Friday. My heart soared because of 28 new units of housing that will be so much more than a band-aid. 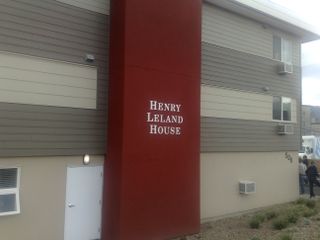 The Henry Leland House officially opened on Friday. As I approached the building, I saw one of my Out of Cold friends. Something, however, was very different. Instead of staggering and slurring, this gentleman was steady and speaking clearly. I couldn't believe it was the same person. Only 11 days sober, and a place to call home, and the transformation was incredible.

It gave me such hope and such gratitude to all those who made the Henry Leland House a reality.

I knew Mr. Henry Leland, not well, but it pained me greatly when he died so tragically. He was an inveterate street person, when I saw him he was almost always staggering, but he was also someone I was also quite fond of. He binned the dumpsters at my apartment building, and I was thankful for his recycling help. He didn't look like he would hurt a fly. We once gave him and Gord, his friend, leftover pizza from a tenant party we organized.

Where he froze to death is very nearby.

Here is a friend of Henry's, now resident of Henry Leland House, talking about what getting off the street has meant to him, and about his connection to the place. Apologies for the shaky video and subpar sound, shot this with my cellphone:

Posted at 03:37 AM in Excellent Entrepreneurship, Social Issues | Permalink

Great post, Arjun. Seems to me we all owe ASK and their partners a huge thank you.

Thanks Emile!
Yes, ASK and their partners are truly amazing. Late night writing of this post, neglected to really give them specific kudos. Thanks for surfacing the appreciation!