Love this...Kudos to our MP! 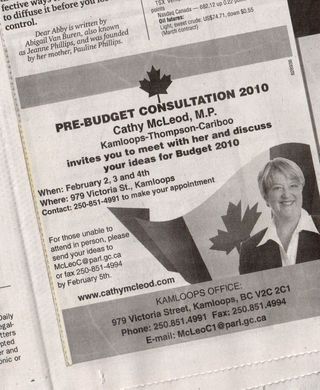 Do you feel you pay too much in property taxes and utility fees to city hall? Do you want to give kudos to a valuable city service that you want to see maintained? Are you simply just interested in what the community spending priorities are? The next couple of weeks offer a great chance to provide constructive input to the 2010 city budget. On February 9th 2010, at 7pm, at the Sports Action Lounge at Interior Savings Centre, city council will be hosting a public budget consultation. It's a great opportunity to learn more about community spending priorities and the taxes / fees we pay.

If you can't make that meeting and would still like to provide input into the budget or get more information, there are a couple a different ways to do so. First, you can contact Sally Edwards, City Hall's Director of Finance, who can be reached at 250 828 3413 or at sedwards@kamloops.ca. Second, you can also contact Mayor Peter Milobar at 250 828 3495 or at mayor@kamloops.ca. Third, you can contact your favourite city councillor(s) - their contact info available at http://www.kamloops.ca/mayor/councilmembers.shtml.

Comprehensive information on the city financials is available in the city "budget book", formally known as the 2010-2014 Financial Plan. The introduction to this book - section A - is really well presented this year and provides a good overview. The other sections of the book go into more detail. The budget book can be picked up at city hall front desk or downloaded from http://www.kamloops.ca/finance/financialplan.shtml.

The February 9th public consultation meeting comes towards the end of the city budget planning process. In July 2009, the process started off with city hall's senior staff approving budget timelines and guidelines. All city departments are asked to look at the previous year's revenue and expenditures and to submit projections for the 2010 budget. Then, senior city staff goes through the projections at least twice before the discussion comes to city council. City council are given a list of supplemental budget items to discuss. The public consultation is held, and then council meets one more time on specific budget matter

Province Once Again Assists Kamloops Homeless. Thinking Through What Next..

Since I've been paying relatively close attention (4 years +/-), I've been pretty impressed with the provincial government's investments to help the homeless in Kamloops.

The latest news that BC Housing has purchased the former Rendezvous Hotel building and will turn into a 24 hour co-ed emergency shelter. Additionally, the province has awarded a contract to Kamloops based company Northern Trailer for the construction of modular homes targeted towards increasing the province's affordable rental housing stock.

The Rendezvous purchase raises some interesting opportunities and issues.

I wonder who will run the new shelter. There are many very qualified social agencies, but I am also thinking specifically of the almost entirely volunteer run Society of Vincent De Paul. Society volunteers have tirelessly, selflessly, and successfully served homeless people in Kamloops for some time. They run the extreme weather overnight shelter, "Out of the Cold", every year. I know there has been some interest from the Society in being involved in a 24 hour shelter. I hope there is an opportunity for them to partner with a social agency here.

There has been push by some to geographically centralize community services for homeless people. The Rendezvous is literally doors away from the New Life Mission and the Men's Christian Hostel. This may be a good thing in that people seeking services can find many in this one area of town. Alternatively, concentrating services also means people have to travel longer distances perhaps. The impact on one neighbourhood may also be quite large.

These thoughts are not comprehensive, just doing a little thinking out loud.

I stumbled on this really interesting conference while reading through my RSS feeds last week. It's called Science Online 2010 and it's goal is to highlight science communication. Really interesting stuff for Kamloopsians, especially with the Domtar and ACC air quality permit approvals in the past few months. I would love to find out more about the following sessions specifically:

D. How does a journalist figure out “which scientists to trust”? – Christine Ottery and Connie St Louis

Description: We will talk about how science journalists can know which scientists to trust based on a blogpost by Christine Ottery that made a splash in the world of science communication. As a relative newcomer to science journalism and blogging (Christine) and an award-winning broadcaster, journalist, writer and scientist (Connie), we will be bringing two very different viewpoints to the discussion. We will be touching on peer review, journals, reputation and maverick scientists. We will also examine how journalists and scientists can foster good working relationships with each other, find out what is best practice when it comes to sources for science journalists, and turn the premise of the talk on its head and ask “Which journalists can you trust?” of the scientists. Discuss here.

Description: Lay audiences often lack the resources (access to studies, background knowledge of fields and methods) to evaluate the trustworthiness of scientific information as another scientist or a journalist might. Are there ways to usefully promote critical thinking about sources and presentation as we provide information? Can we teach them to navigate competing claims? And can we do it without promoting a distrust of science itself? Discuss: here.

Description: Janet, Sheril, and Isis regularly write about the role of civility in dialog with the public and other scientists. In this session, we will discuss the definition of civility, its importance in the communication of science, and how the call to civility can be used to derail discourse. Additionally, we will discuss the importance of finding the appropriate balance of civility and tolerance for what gets labeled as incivility in reaching and engaging each other. We reserve the right to use the words “balls,” “muppethugger,” and “wackaloon,” to FWDAOTI liberally, and cannot guarantee that at least one of the moderators will not lose her junk. Discuss here.

(transcribing this post from my iPhone travelling to Vancouver on the bus. Very open to feedback on typos and other errors)

Kamloops North MLA (and my former city council colleague, as Mayor) Terry Lake said yesterday that people shouldn't let emotions get the best of them and should trust the BC Ministry of the Environment (MOE) approval process. These comments come after the MOE approved the air permit for the Aboriginal Cogeneration Corporation's plant that aims to gasify creosote soaked railway ties to create energy.

I generally agree with Terry's comments. I've sat around a few tables with MOE officials in Kamloops and, while I don't know them well, they have always struck me as professional, competent people.

So, I've been wondering why I find myself questioning the air permit approval and, moreover, why a great number of people I've talked to really question the approval.

I've always found Terry to have a great trust and respect for our government institutions. He seemed to me a real "company man" i"at city hall, and I presume he acts similarly within the provincial government.

Most people seem to be going in the other direction. People seem to have much less trust in government and, at the same time, are feeling more empowered to research issues themselves on the Internet. We see such partisanship in our democratic system that we perhaps assume that bureaucrats either consciously or unconsciously feel the need to take sides as well.

I am not a big fan of some of the strategies employed by the Save Kamloops group, who oppose this gasification plant - but I think I understand where they are coming from. For example, I feel the speaker they brought in, Dr Paul Connett, acted much more like an activist than an academic. He insulted people on the other side and MOE officials uneccessarily, I felt, and this weakened his credibility in my eyes. I appreciate the citizen activism within Save Kamloops, and think that they should focus on providing reasoned, solid arguments that might persuaded undecideds on this issue. Still, I get the emotion. It does make a lot of sense to me.

Specifically to the ACC plant, the main concern is health impacts. This is a pretty emotional issue for almost everybody, I would say. The technology used in the project is seen as unproven in real world application; the project proposal refers to a "demonstration", or something very similar. And no one - not the Ministry and not ACC - has really explained to the public their belief that the demo part is irelevant to air quality concerns. I'm still open to hearing and accepting this explanation, at this late date. The lack, however, of upfront and early public engagement on this has been quite a significant misstep. I'd say it has bred a lot of the mistrust.

It was an active city council meeting today. Council dealt with some thorny issues - Abby the dog, Aboriginal Co-Gen Corporation's gasification plant, and controversial changes in garbage pick up schedules. There was quite a feisty gallery as well - some of Kamloops' most colourful and controversial activists were in attendance.

Council decided to take a suprising number of actions vis a vis the MOE's approval of an air permit for the gasification plant. They decided to write a couple of letters expressing concerns and asking for explanations. They also directed staff to explore any legal options available to them to regulate the plant. It seems to me that the people who have expressed grave concerns about the plant can take a lot of comfort in council's actions today. This action still might not make the plant any safer or stop it completely, but it might. I don't think I've ever seen such a flurry of motions.

Province Seeking Input on the Cosmetic Use of Pesticides

While rooting around the Ministry of Environment web site, looking for more info on the decision to approve the Aboriginal Cogeneration Facility, I instead found this.

City Council did not support it. Hundreds of Kamloops residents strenously oppose it. I have opposed it.

On the other hand, people I respect, such as Interior Science Innovation Council Bill McQuarrie, are great supporters.

The Aboriginal Cogeneration plant that will gasify old creosote soaked railway ties has been given the go-ahead by the BC Ministry of Environment.

It will be good to understand the factors behind the Ministry's decision.

Waiting to see how the community reaction unfolds on this one.

Kudos to the the folks at TRU - this promise to be a great evening!

Looking forward to welcoming back the Great Tria Donaldson...

The Environment and Sustainability Speaker Series will sponsor a Copenhagen Post
Mortem, to look at what happened and where we go following the Copenhagen Climate

when the Czech Republic was Chair of the EU in the run up to the Copenhagen
Conference and Tria Donaldson, Canadian Youth Delegate to the Copenhagen Conference
will be making presentations at TRU in the Clock Tower Theatre at 7 pm on Thursday
January 14th. Since each of you has a network which is different than mine and we
would like to give as many people as possible the opportunity to attend I am sending

you this email in the hope that you will forward it to your network.
If you have any questions please do not hesitate to contact me. I thank you in advance.
Regards,
Tom

Director of Environment and Sustainability

Let's go for a really good news story: the amazing success of the Kamloops RCMP in addressing crime in Kamloops in 2009. This has not just been about fighting crime, but it's also been about preventing it. The local detachment's increaasingly holistic prolific offender strategy has been very effective.

I really hope Supt Jim Begley and his people continue working to target the really bad activity and work with social agencies business associations, neighbourhood associations and others to address the rest.