Flood advisory for the North and South Thompson Rivers...

Find out more information, what you can do, and what city hall is doing: 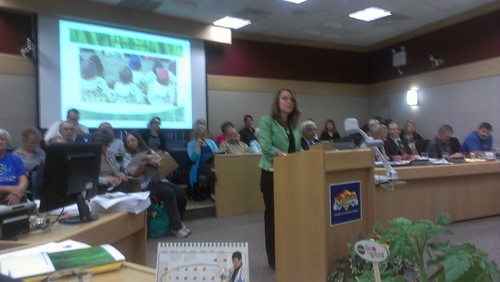 A delegation presenting to the June 12th Council meeting...

Would love to hear your thoughts on the following issues on the June 19th City Council workshop agenda:

1) 2012 Citizen Survey - exploring how the next in a series of citizen surveys should be conducted.

3) Adjournment Time of Council Meetings - the latest time a council meeting could last before a vote might be adjusted. This pertains especially to decisions on public hearings around property developments. 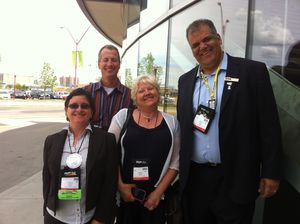 I was heartened to hear that this standing committee takes a holistic "systems" point of view on policing issues. That is, that society needs to reduce the determinants of crime (troubled youth, addictions, mental illness) and not only focus on prosecuting criminal acts and putting people in jail. The committee has a few priority issues: medical marijuana, the 700 mhz emergency radio band, and growing policing costs to local governments. The federal government are embarking on a cost cutting program for the RCMP that will see over 100 million dollars less funding. These cuts may have impacts on local policing budgets.

President's Forum Panel: The State of Canada's Cities and Communities

FCM recently published a report on the State of Canada's Cities and Communities. Building of this, this panel engaged in a frank and free flowing discussion on this issue. Here are some points raised that I found interesting:

Cameron Keller, from At Home / Chez Soi, presented on a national intiative that provides housing and intensive support to people who are homeless and suffering from mental illness. This project is showing some very positive initial results. Mr Keller indicated a great willingness to talk with any local government interested in learning how to participate in this type of work.

Back from Saskatoon. Quite an amazing experience to represent the citizens of Kamloops at the Annual Federation of Canadian Municipalities (FCM) convention. A whirlwind four days of learning, listening, and networking. There are so many takeaways. 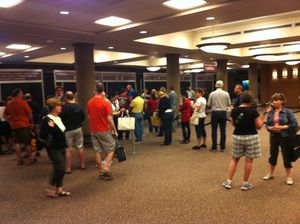 My guess, though, is the biggest takeway for me will be the business cards I mentioned in the above post. If I am able to keep in touch on issues of community service with just a small fraction of the amazing people I met at FCM, I can almost guarantee I will be a more effective councillor here in Kamloops. As a couple of examples, I has quite good chats with a muncipal staffer from London Ontario specializing in community engagement , a councillor from Prince George who sits on their financial core review committee, the former CEO of FCM, and a councillor from Saskatoon interested in improved bike and pedestrian pathways.

Here are some reflections from each of the Friday June 1st sessions I attended at FCM 2012: 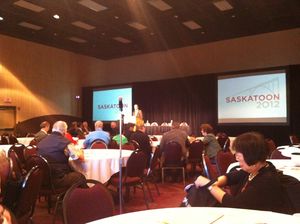 Delegates Just Before Start of Meeting

Early Friday, the first proper day of the conference, all the delegates from BC met to get a convention orientation and to hear short introductions from BC folks running for FCM positions. This was a big convention politically for BC as it was our turn to elect someone from our province to be FCM's 3rd VP. This person would most likely become FCM President three years from now. In the running were Prince George Councillor Garth Frizzell, Surrey Councillor Marvin Hunt, Vancouver Councillor Raymond Louie, and Victoria Councillor Chris Coleman. This study tour involved going on a guided tour of new storm overflow projects in Saskatoon. The city has experienced three "100 year" storms in the past seven years. "100 year" storms are storms that are forecast to occur only every 100 years. Climate change has thrown a big wrench into the weather prediction game. The City of Saskatoon has built overflow pipes and basins. The basins typically function as city parks. We have a similar basin at the Singh bowl in Kamloops. What this session made me think about is how we incorporate new, more severe, and unpredictable weather event (such as storms) into our infrastructure planning. Saskatoon has paid for these projects by adding a flood protection levy to peoples' water meter bills. I also wonder whether there is a will among people in Kamloops to pay such a levy. 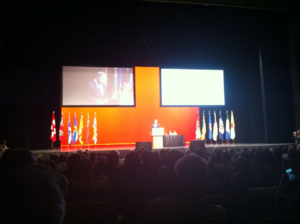 Leaders of the federal NDP, Liberal, and the Green Party spoke to the convention. Conservative Minister of Transportation, Infrastructure, and Communities Denis Lebel also spoke.

Mr Mulcair shared his view that the current federal government is abandoning critical roles and committed that an NDP government would provide long term, dependable funding to cities. He took some considerable heat from a questioner who chided Mr Mulcair for his widely reported comments criticizing current oil sands development. Mr Mulcair said that the environment and the economy should work hand in hand and did not back down from his comments.

Mr Rae said that all orders of government needed to collaborate more effectively. He commited to work to redress what he called a fical imbalance for municipalities in which local government is often expected to do more without being able to secure the necessary funds. He mentioned his support of  FCM's holistic approach to policing and expressed the Conservative omnibus bill C38 would further download responsibilities to local government.

Minister Lebel spoke of the government's actions to make permanent the Gas tax funding that the Federal government transfers to local government and also committed to creating new infrastructure program in time for the next construction season after the current program expires in 2014. Minister Lebel announced a series of rountable meetings across the country to consult on what new infrastructure program should look like. He shared the government's view the the environmental assessment process for major industrial projects (eg. mines, pipelines, dams) should be streamlined and given definite time limits for completion of the assessments.

Being so new to these discussions, I am still trying to get my head around the main issues around infrastructure. I need to see if I can get the powerpoint slides from this session. Essentially, infrastructure includes things like roads, transit, bike and pedestrian paths, water and waste water project, and recreation facilities. The federal government is trying to better understand how to structure funding programs so that they are flexible, transparent, and accountable. These consulations will continue through the next few months. I would be happy to pass along questions and comments. 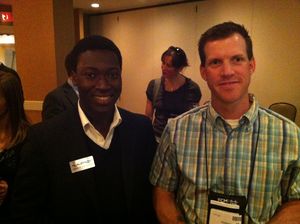