A Unique and Special Relationship between Kamloops and the Royal Canadian Air Force... 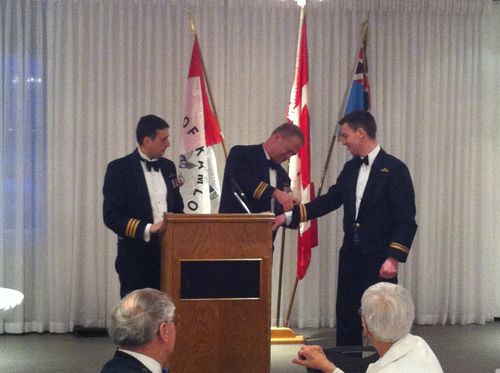 A member of 419 Squadron gets promoted to Captain at the Kamloops Overlander 886 Wing dinner.

Did you know Kamloops is one of only two Canadian cities (the other being Ottawa) to have a regular Air Force flyover on Rememberance Day?

Did you know that Kamloops is one of the only communities in Canada to have a formal relationship with a Air Force squadron that is not locally based?

Wing Commander John "Moose” Fulton was a beloved and legendary WWII flying ace who was tragically killed in action during the war. He was born and raised in from Kamloops and our airport, Fulton Field, is named in tribute to him. Wing Commander Fulton is also still honoured by his Air Force squadron, the 419 Squadron, a NATO training squadron based in Cold Lake, Alberta. Every Commanding Officer of 419 has taken on the nickname Moose for the duration of his tenure.

Members of the 419 Squadron visit Kamloops at least twice a year - once for Rememberance Day and once, around this time for a year, to participate in a dinner hosted by Kamloops’ very own 886 Overlander Wing, an association of military veterans.

I consider myself very lucky to have attended many of these dinners since I’ve served on council. The group at the 886 Wing dinner has gotten smaller, as more Veterans pass away. Alec Sim, an incredible Kamloopsian and Honourary CO of the 419, reminded us this year that we should always remember the sacrifices veterans have made for our country. His grandfather and uncles served in WWI. Alex himself stormed the beaches at Normandy and served in Korea. Alex made special mention of the 419 squadron members who had joined us. He said they are serving their country so very well.  Three of these young officers were given their promotions at the dinner, going from Flight Lts to Captains.

When I was in high school, I had some opportunity to explore the military as a career option. I chose not to look too far into it because I didn’t like the idea of being front line in a military conflict or war. I’d like to be one of those who help prevent conflict or wars in the first place. Spending time with Veterans and active duty military folks, however, has given me huge respect for their commitment to step up when they are called, to risk and make the ultimate sacrifice. Unfortunately, there are times when efforts to avoid conflict or war fail.  My own Grandfather, who I loved dearly, was in the infantry in the Indian Army and served in the Korean War.

I also know a lot of the folks flying for airlines today got their start in the Air Force, with its great training programs.

There is a wonderful, family like atmosphere at the dinners in which the 419 Squadron dinners participate in Kamloops. It’s such a honour to be invited.

Considering Calls to Take a Stand on the Ajax Mine Proposal... 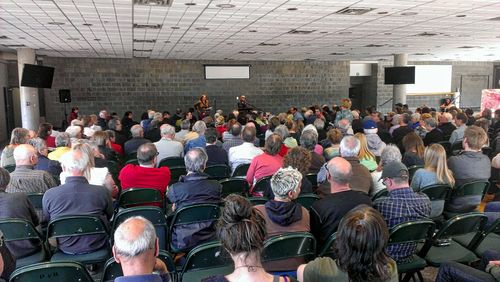 Union Leader Richard Boyce Speaking Out Against the Ajax Mine Proposal at Recent Forum.

If I'm invited to an event related to the Ajax Mine proposal, whether pro or con, I try to attend. Ajax  remains a huge issue in Kamloops, three years after it first came to public attention. KGHM International, the company behind Ajax, will be submitting an application to the BC and Canadian Environmental Assessment offices in early 2015. I think all of of us on city council recognize a responsibility to learn as much about this issue as possible.

Most recently, in mid April, I attended Richard Boyce's presentation on why he has decided to oppose Ajax. Richard is the President of the Steelworkers Union that represents the workers at Highland Valley Copper. He has been in the mining industry for 40 years. I have a lot of respect for Richard and his work in the community.

During the presentation, Richard urged city councillors who have not yet taken a position on Ajax to "get off the fence". I believe he said something to the effect that he would have a lot more respect for councillors, even if they supported the proposal, because at least people would know where we stand. I hope I heard that correctly. He obviously hopes all of us on council would be opposed.

TRU Professor Derek Cook, in the question and answer period, more explicitly tied councillors not taking a position to the November civic election, in my view basically advocating people not vote for councillors who have not yet come out opposed. Derek, in the past, has invited me to speak to his students and I appreciated that opportunity.

I would be totally remiss not to also mention here the efforts of Councillor Donovan Cavers, who sits next to me on council, and often asks whether I've "gotten of the fence yet".

I've thought about whether I should take a position on Ajax now. I have indeed had three years to consider the proposal. I am 95% sure I will take a position.

Respectfully, I am still really reluctant to take a position pro or con Ajax at this time for a couple of reasons:

I appreciate all the advocacy on both sides of the Ajax debate. I hope we can keep it respectful and civil. I definitely want to make the case that city councillors who have not taken a side yet are doing so entirely in good faith, based on our own values and ways of working.

Learning about Lobbying at the Legislature... 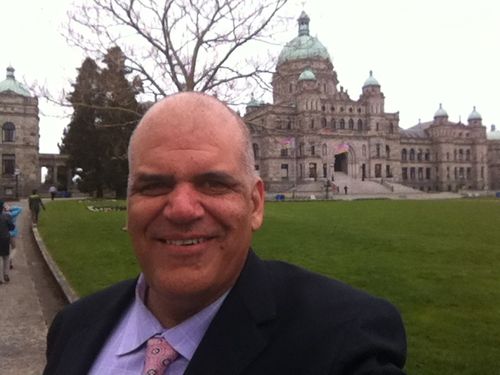 In early April, along with my colleagues on the UBCM Executive, I had the honour of working on behalf of communities across BC, to meet with provincial MLAs and Ministers on creating a stronger fiscal future for BC local governments.

The strong fiscal futures initiative has been unanimously endorsed by the UBCM convention and it's got some really interesting and important elements that you can read above through the link above.

I wanted to focus on something a bit different here. It was huge learning experience for me to go to Victoria and help with this effort. It was an amazing honour and I really didn't want to screw anything up.

Just before we arrived in Victoria, we received information about the MLAs we would be meeting with and which of our UBCM executives we would be working with at each MLA meeting. We were each given specific parts of the report to talk about in the meetings. It was really interesting to work with people I have never really worked with before. We all did pretty well although the transitions from parts to part, for me, felt sometimes (perhaps naturally) a bit clumsy.

Sometimes meetings were changed quickly due to unforseen circumstances and we all had to be quite nimble in responding.

All the MLAs I met with were interested and gave great guidance on how potentially we could secure provincial government support.

I was quite struck by how many rules the MLAs have to follow. They have to be in the legislative chamber to vote no later than 5 minute after bells start ringing throughout the building. They have to get leave from the whip to be excused from voting. I saw a cabinet minister running through the hallways before they locked the door to the chamber after the 5 minutes.

This was also a situation where the generally multipartisan nature of our local government world met with the generally partisan world of the provincial legislature. We have people on the UBCM executive with good links to all parties represented in the legislature and we met with MLAs from every party. When we met with MLAs, it was almost always in their party groupings.

It's a little intimidating to walk the halls of the legislature and realize the important work that gets done and the important work we hopefully were doing. I am not sure it would be good to become to comfortable with the opportunity. I hope I always a feel humbled if I get future opportunities to serve and participate in these efforts.

April was a busy month and I am hoping I can get write some updates and reports here soon. A quick preview: