Sitting in The Big Chair: Being Mayor for the Day....

Today, I had the honour of chairing a council meeting. Mayor Milobar had to travel to the coast for the first meeting of the new provincial / municipal RCMP contract committee and it is my month to be deputy Mayor. Every councillor takes a month and we all just cycle through the year as the Mayor's backup.

Chairing a council meeting as deputy Mayor is really different than participating when not chairing. Your concerns shift from asking questions and providing meaningful input to making sure all are given a chance to speak and that the meeting moves along in as timely manner as possible. It is a real balance to allow colleagues time to ask questions and speak to motions AND to make sure the meeting is conducted within a three to three and half hour time frame (that's usually the maximum before we all start to get really squirelly). It is pretty intense being in a council meeting, lots of meaty issues, cameras always rolling, media watching.

The actual Mayor does a much better job of chairing the meeting while also asking questions and providing meaningful input. Mayor Milobar has even more respect from me after today. Since being elected again in 2011, I've found Pete chairs a great meeting -  but I really had no idea of all the stuff you need to juggle.

Looking forward to getting back to my regular seat next week and also really thankful for the experience and practice.

Perils and Opportunities of the Ajax Mine Review Process...

I wrote a column in this past tuesday's Kamloops Daily News with some thoughts on the perils and opportunities of the Ajax Mine review process. The online comments on the article have been very interesting, and I've enjoyed the opportunity to engage with most of the commenters. The Daily News comment boards are a bit like the wild west. Not the most civil place on the planet. Not awful but also not for those with thin skin. Here is the column, comments follow below.

Exactly what no city council wants to have happen...

From the Windsor Star

Kamloops most popular City Councillor is resigning to take what sounds like a very exciting opportunity as CEO of the Tk'emlups Indian Band.

I've had my differences with John O'Fee over the years, but it is impossible to argue with the record of success in his 11 years on Council. In every Council election since 1999, John has topped the polls, usually with an incredibly large cushion between him and the councillor who came in second. I was personally quite surprised he did not become a MP in the 2004 Federal election.

I once asked a veteran school board watcher, someone who has been around for at least 30 years, to give me his choice for the best School Board Chair he has seen. His answer: John. In this expert's opinion, John also kicked butt at the board office.

Many people know John has been the driving force behind the expansion of the Kamloops Airport. People who email John are often impressed with his intelligent and thorough replies. When I served on Council, there are couple of things that really impressed me. John has a way of synthesizing a discussion down to the fundamentals and proposing a wise path forward that almost all his colleagues can support. Whenever I wanted to talk to John, his door was always open. I often wish I had taken advantage of that openness a bit more often.

John leaves City Hall to join a dynamic organization with huge potential. The Tk'emlups Indian Band has land, businesses, and a passionate core membership. I personally want to wish John all the very best in using his impressive talents in his new position. 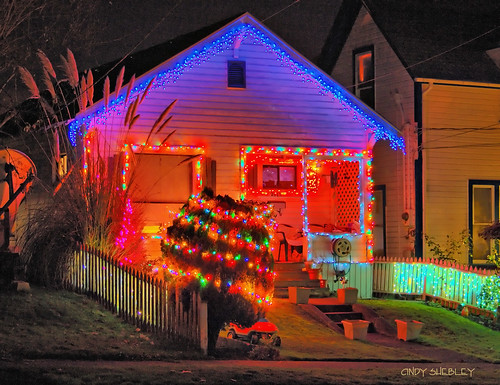 I've been pondering some of the reasons why some people go crazy with Christmas lights on their homes. Almost every year, my wife and I drive around an evening or two and just enjoy all the different displays. These lights seem to be about more than showing off - and even more than simple beautification. Over the past years, I've heard a lot of people talk about the importance they place on having privacy in their homes. I think that is a really important need. Christmas lights, however, seem to send the exact opposite message. This is the one time of the year where many folks actually invite people to slow down and have a look. Putting up Christmas lights, in my humble opinion, is an act of invitation, an act of community and citizenship.  This is indeed a most wonderful thing.

A Pacifist's Rememberance: Lest We Forget...

It's a pretty uncomfortable feeling. Given my love and interest in Kamloops, I don't like feeling uninformed about what's happening around town. I've loved my MA in Professional Communications program. It has opened my eyes to many many things, given me such great learning opportunities, and allowed me to meet most wonderful people. My studies have, however, taken a lot of time and will continue to do so until spring 2011.

When I served on City Council, I had this magic mailbox in the Mayor's reception area. It would just fill up with all this interesting information and with many gracious invitations to all sorts of different events. These days, I have to work harder to keep on top of stuff.

I am trying to make sure I keep my eye out for the sort of stuff I got in that magic mailbox. As I go into my MA thesis writing phase, I thankfully have a little more flexibility in my schedule!

Apologies for lack of posts. Just finished two days of directors meetings for the Canadian Community for Dialogue and Deliberation. Those were in Ottawa. Now headed to New Orleans with my lovely wife for a bit of R&R. We booked the trip before the oil leak started.  I am doubly glad we are going down now.

I'm eager to to do a very small bit to help the economy in the gulf. I will be eating lots of seafood.

I've been a little remiss on noting the entrance of some promising new social media offerings from the local media.

First, Doug Collins and James Peters are now publishing the text of their One Man's Opinion CFJC TV new segments on a blog. With comments! - so much better than talking to the TV.

Second, Radio NL has posted a podcast page. My favourite podcast offers segments of the Jim Harrison show with extended discussions on various issues of the day. I am not such a big fan of NL Editorials - which don't often make a lot of sense to me in content or tone. No comments here either.

5 Things I Would Like to Offer on Your Kamloops...

As I live through what is one the most interesting and insanely busy times on my life (moving, starting a Masters Program, trying to start a viable business), I have spent a bit of time thinking about how this blog can be of more use to Kamloopsians and people interested in Kamloops. Here are 5 preliminary thoughts, I'd be interested in yours: