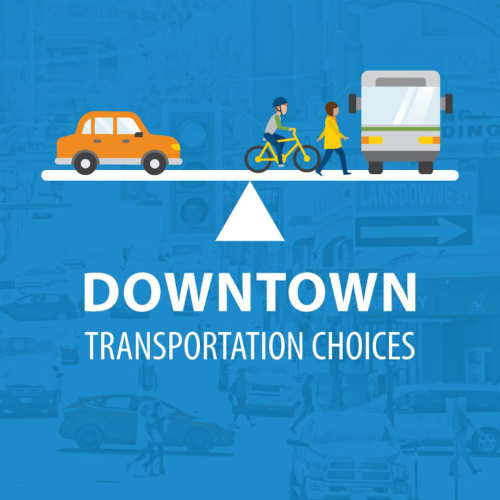 After many months and a hundred thousand dollars, at this week's council "committee of the whole" meeting, city staff presented what most would have thought would be the final draft of the downtown Kamloops transportation choices plan.

Almost always, final drafts of plans are approved as there has already been a lot of discussion, debate, and decision points.

Reading through the final draft before the meeting, I had strong concerns the plan wasn't ambitious enough in enabling citizens to choose to shift from driving cars as a single occupant to other methods of transportation.

But I thought mistakenly that I would be one of the few council members with concerns.

At the meeting, many other concerns came out. Chief among them, in my view, were that the plan unfairly targeted drivers, that engagement on the plan was not adequate, and that the plan contained statements that were not in keeping with modern values and the local economy.

I've rarely seen a discussion like this. It was sometimes pretty pointed and emotional. Many council members were quite critical of the plan as it was written and presented. The vote to approve the plan was defeated 5-4.

This left us all, and probably more so city staff, a little beat up and at a loss. Did things just go big time sideways?

After this investment in time and money, what would happen to the work done to this point.

The council discussion this week was actually immensely helpful. Every council member shared a bit more about their considered views and values. As we move forward to try to get overall council approval, we can hopefully craft a better and more durable set of actions and policies based on the robust, frank, and deeper dive discussion we had this week. I think we learnt a lot about how this council currently feels and thinks and thats very important learning.

In quite a short (maybe half hour) public hearing tonight, City Council made some decisions I feel could have quite an impact on Kamloops:

All in all, it was an interesting meeting to watch. 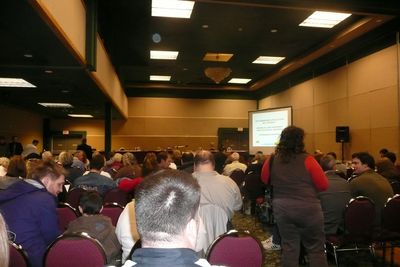 A long and emotional public hearing on rezoning four pieces of city owned land to allow for affordable housing. In a nutshell, the provincial housing authority, BC Housing, is now asking communities to provide land on which affordable housing could be built. Kamloops city hall staff have been working to identify pieces of land already owned by the community for this purpose - wanting to avoid purchasing any new land.

All the land proposed is now being used as park space, or at the very least unmaintained recreation and wildlife space. One particular piece of land, on Cowan Street, has a lot of neighbourhood use and many people fought to keep the land zoned as is. Council, I feel, made the right choices in a difficult difficult process. Cowan Street keeps the park, and the three other areas get rezoned for affordable housing.

There was nothing pretty about this hearing. At its core, as many stated on the night, it pitted two groups of citizens against each other - those who supported park land and those who supported affordable housing. That's a pretty crude characterization. A lot of people support both, but the question on the night is what people wanted to do with these particular pieces of land. What's worse is that I know and respect and like many people on both sides. And, on the night, there was no real compromise to be had.

I am a huge advocate for affordable housing and I worry about the bad blood generated as we continue to work to end homelessness in Kamloops. Might it have been better if those who stood up on behalf of the plan, all of them who I respect and trust, conceded that the Cowan St plot should stay park? I am not sure, this is very much a question. I worry, though, about a reputation for balance and conciliation.

I've been at enough public hearings to know that homeowners rightly get very emotional when talking about a rezoning proposal they don't like. Some folks at this hearing got very heated and, in some cases, downright nasty. This really troubles me as well - especially the nastiness.

Solution? Well, that is a tough one. The one piece of land that got rezoned, at the top of 9th avenue at the corner of McMurdo Drive, caused a lot of community anxiety. I sincerely hope these folks will have their concerns adressed and, importantly, will over time feel good about any sacrifices they make. The vast majority concerns I heard at the public hearing, I believe can be addressed. Maybe, the future developers of the property should commit to sit down, one on one, with each person who raised concerns at the hearing. Perhaps, also, each person who expressed concern about any property decided upon should be personally invited to future forums on affordable housing.

The public hearing process in BC has a whole host of really bad problems in situations like this. Not sure what to suggest yet for potential solutions, but would like to put my head to this.

The Document That Started the Current Parkade Debate in Kamloops...

The community debate on the proposed parkade in or on the edge of Riverside Park continues. Here is the powerpoint presentation from council workshop that sparked everything off publicly:

The Militarization of City Bylaw Officers?

I've been hearing a few concerns about the "militarization" of the city hall's bylaws department. At the very least, there is some feeling that we should not be replacing the RCMP with bylaw's officers. Bylaw officers currently sport bullet proof (knife proof?) vests emblazoned with the words PEACE OFFICER - and I have heard they may carry handcuffs.

Are these overkill? Are they necessary to do the job in today's times? Are bylaw officers trained in arresting and handcuffing folks? Do Rambo looking bylaw officers unnecessarily scare people or send a message that is too strong?Question to research and ponder.

Downtown Gets Boost from Rocky Mountaineer... 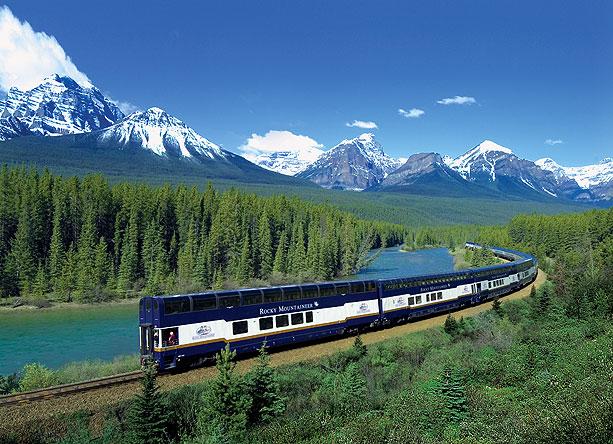 It's a bit hard to fathom how much exposure Kamloops derives from the Rocky Mountaineer stop. I was in Chicago in the summer of 2005 for the Rotary International Convention and could not believe the number of people I met who had been through Kamloops on the train.

Rocky Mountaineer management has decided to spread its summer passenger stops in Kamloops throughout the week. Instead of a large amount of visitors two or three times a week, the same number of people will be more evenly distributed throughout 5 or 6 days I believe.

The upshot of this is that all Rocky Mountaineer guest will now overnight in downtown hotels. For passengers on this incredible train trip, this decision makes total sense. Downtown Kamloops has such great ambiance and energy. I've heard it described as one long park - with the wide sidewalks and decorative street features. There is not much of that around the southwest sector hotels.I know the Kamloops Central Business Improvement Area is gearing up to make sure new visitors have a great experience.

I am always puzzled when I hear people say we have a shortage of parking downtown. Perhaps, for employees, but as a frequent patron of downtown businesses, when I drive, I am never at a loss for a parking spot.

I prefer the bus , but still find a need to drive from time to time.

I usually have to walk a few block from where I park downtown, but I like the exercise and fresh air. I guess its a matter of perspective.

A quick comment on marketing transit: I still don't see enough marketing of transit to downtown employees. It may be happening, and I may have missed it. It sure would be good to find out if we can get people riding the bus, before building a whole bunch more parking downtown.

A Heineken at the Transit Exchange

I love travelling by transit. The last few months, I have been in my car way too much. How I missed letting someone else do the driving while I read, answered email, or socialized. How I missed the extra, no longer gas money in my pocket.

Early this month, I bought my bus pass. And I have been trying to schedule so riding the bus is workable with my busy life. .

Today, I went down to the transit exchange to catch a bus  to Sahali. As I walked by the bus shelter area,  someone from within a crowd of teenagers yelled out "hey, there's Arjun Singh!!!!". I craned my neck in an attempt to spot this enthusiastic person, but only caught a fleeting glimpse of what seemed a young man in amongst all the other people.

I walked to my bus stop on the exchange and sat on the nearest bench. The enthusiastic young man came over. He said, "you are Arjun Singh, aren't you, I've only seen you in the paper".  I confirmed that I was indeed me, and the young man shook my hand and sat down beside me.

It was then I noticed the large bottle of Heineken beer in his hand. And I became quite alarmed.

Continue reading "A Heineken at the Transit Exchange" »

Clip from my End Homeless is Good For Everyone Press Conference...

How to End Homelessness - Create Economic Activity, Reduce Crime, and Save Taxes at the Same Time.

Ending homelessness in Kamloops makes sense for so many different reasons - morally, fiscally, and in terms of crime and community safety. Whether someone voted conservative, liberal, ndp, or green in the federal election - we will all find significant common ground in ending homelessness.

Businesses benefit when people are not eating, sleeping, and defecating in this alley. Victims of crime benefit as less people get caught up in breaking the law on a habitual or occasional basis.

Significantly, and I have had this number confirmed by BC's Minister of Housing and Social Development, providing services to people living on the street costs taxpayers (round numbers) $55000. Housing the same person, and supporting them in housing costs (round numbers) $37000.

So again, there are many good reasons to end homelessness. To right a moral wrong. To help businesses grow. To reduce crime. And, in fact, to be more efficient and accountable with our tax dollars.

So how exactly do we end homelessness in Kamloops?

Let me say, first of all, we have great social agencies  working to house people and support them in housing. We have great and growing community involvement from faith based organizations, the business community, and from concerned citizens from all walks of life. What I will propose today, I have learnt from all these great people.

Many communities across North America are adopting these approaches and are starting to have great success.

Lastly, let me say how proud I am to have been of part of our current city council that has, I think, worked very hard to assist the creation of supportive housing in Kamloops. I would like the next council to build on this success.