Should City Council Authorize $260 000 for a Business Case Study on a New Performing Arts Centre? 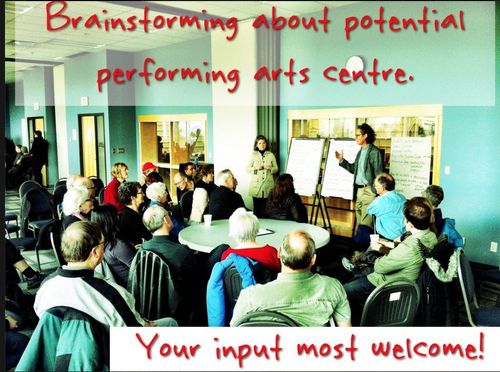 Elections matter. And in the 2011 civic elections, our Mayor Peter Milobar highlighted a new performing arts centre in his election platform. He spoke about, at very least, getting a community conversation going on the proposal. I supported and continue to support this effort.

The above photo was from a public consultation held a year ago. A couple of hundred people got together and discussed what a performing arts centre could look like. The Mayor struck a committee to lead the process.

Now, council is being asked to contemplate funding a study to look into a much more detailed business case and building design. I admit to having some sticker shock when I saw the amount attached. I also feel that we should do the best business case and design study we can. It should save us money in the future.

Over to you. What do you think?

Here are the details and rationale from the  supplemental budget package:

I should have mentioned in my last post that I am not intending to single out any specific funding request for scrutiny in the 2014 budget decision process. I am looking for input on all the funding requests included in the 2014 supplemental budget list.

The video clip below shows a clip of me asking Inspector Jennie Latham (who we are unfortunately losing to Ottawa) about moving around internal resouces. I've also included the RCMP business case.

Broadcast Centre reporter James Peters tweeted the above very understandable sentiment from the council budget meeting this morning. Indeed, the meeting was messy, but it was also robust. Almost every budget item on today's agenda was discussed and every councillor had a lot to say. I think in the final city budget meeting of any given year, of any meeting, the tone and tenor was entirely appropriate. We are living under the paradigm of fiscal restraint and greater involvement. In the end, largely through the work of city hall's assistant finance director Doug Stewart and other city staffers, we were able to get the city tax increase from a 5.7% number a couple of weeks ago to 1.92% today. This exercise in decreasing the tax rate happens every year but I can't help but feel we have a new vigour about it right now.

These slides provide a really good starting place to understand the City of Kamloops budget and what your tax dollars fund. These were accompanying the presentation last tuesday at the first budget meeting of 2012. Council is hosting some really interesting (in my humble opinion!) budget public education and engagement round table sessions as well.  My paper copy scanned a little bit fuzzy on some of the pages. I am sorry about this. I will try to get a cleaner copy up really soon.

Should Zero Based Budgeting (or something approaching it) Be Tried at City Hall? 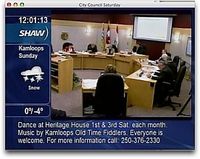 I wonder if, especially at the start of a new 3 year term, City Council should try to go through the entire community budget in more detail. The established process, more or less, is for Council to go through only items that are additional expenditures. I have heard some calls for a more detailed examination.  A "Zero based" budgeting approach might be seen as the most detailed. Something more towards this, not quite the whole way, could also be considered.

How could the community as a whole be involved in this process? Wikipedia has a good primer on the pros and cons of Zero based budgeting versus Incremental Budgeting (which seems to mirror the current approach).

One Reason Why Council Should Have Waited to Raise Transit Fares... 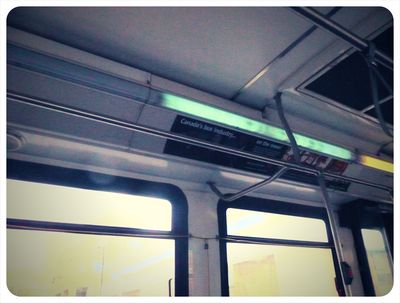 Shortly after City Council made their initial decision to raise transit fares this week, someone loaned me their paper copy of the Kamloops transit schedule. I started to flip through the pages with a very specific purpose. When I served on Council, there was some discussion about offering advertising space in the schedule and, if memory serves, there was some energy around that idea. But, no ads in the present schedule. In fact, lots of empty white space.

I then got on the bus for a short ride home. On the inside of most buses, there are ad spaces on the walls above the seats. A bit better news here - some ads. But, certainly lots of empty spaces.

This is all to say that I think it is important for Council to explore other opportunities to increase revenue before it increases fares. Maybe there was a way not to go against vocal public opinion and to create more of a win/win for the community.

City Hall's stalwart transit coordinator Erin Felker has done a great job working on enhancing transit service. I felt for her, being on the hot seat the past couple of weeks. BC Transit has been generous in offering Kamloops new hours and fare products.

I think that transit could be marketed and companies could market through transit a lot more effectively. I might be wrong here. I might be missing something. The Council and community discussion did not really go into these areas.

My Vlog Report on The 2011 Kamloops Community Budget Public Forum...

Raw Notes from Our Community - The City Budget Meeting 2011...

I was incredibly happy to be with about 80 fellow citizens who attended the Kamloops community budget public forum last night. I took notes from the 21 speakers who spoke and asked questions from the microphone. Donovan Cavers gave a longer presentation at the start of the input part of the evening, making the case that transit fares should not be increased. Here are my notes from the rest of the speakers. I might have missed some things said, so I have not included names of the people who spoke. I am hoping these notes provide a general overview of the input council received:

Speaker #10
- against raising transit fares and supporting increase in parking fees
- single moms like his mom who was dependent on bus
- how will you get to increase transit goal?

Speaker #11
- do you advocate with BC transit? Should do so strongly
- mayor: we do advocate

Speaker #13
- do we really need weekly garbage collection
- why do police officers go up while crime rates go down
- longer public engagement period for budget.

Speaker #15
- high school student: need to focus more on young people
- decisions should be more openly discussed
- longboard not allowed to use
- transit fares: being punished for being environmentally sound
- mayor : YouTube and twitter coming along. Longboards are allowed on many roads
- keep schools and teachers informed

Speaker #17
- proud of sustainability plan and looking fwd to it's integration into city operations and ocp
- supports transit fare staying same, parking study, sustainability coordinator.
-opportunity to be forward looking and to prepare for changes coming

Kamloops City Council today agreed to postpone a decision on a proposed transit fare increase so that it could hear more public input. Anne Grube and Matt Greenwood were given time in today's meeting to ask for a postponement so that a group of Kamloops citizens could prepare a presentation supporting keeping transit fares at their present levels.

Kudos to Mayor Milobar for allowing Ms Grube and Mr Greenwood the opportunity to make a last minute delegation to council. The transit fare increase proposal was discussed a couple of weeks ago at a council budget meeting a few weeks ago, but this past Friday was the first opportunity for the public to find out that a formal recommendation to increase fares was on today's agenda.

Council seems to be hearing a lot of opposition to this proposal. There were several letters in the council documents package today. Ms Grube and Mr Greenwood and their colleagues in this effort will make a presentation to council next week - Feb 8th. And then Council will make a decision. Sounds like a reasonable approach.

Control Freaks or Asleep at the Switch: Kamloops Councillors and the City Budget

At this week's Kamloops Council budget meeting, it seemed to me there were two distinct views on how much councillors should be involved in the budget process. I will take them a little to the extreme to illustrate. I know that the reality is probably quite a bit more complex.

View#1 - Should not be a control freak

City councillors have neither the time or expertise to delve deeply into the city budget. Council should give city staff a target tax increase / decrease - this year, it seems to be around 2% - and let staff generally figure out how to get to there. City council does discuss and debate a list of supplemental budget items to help staff, but especially when it comes to the vast majority of the budget, staff need to be firmly in the driver's seat. They have the knowledge, time, and skills to perform this task well.

View#2 - Should not be asleep at the switch

City Council are elected by the people at least partially on the basis of their points of view and platforms. City staff are unelected and not directly accountable to the public. As such, Councillors should do more than just set targets for tax increases / decreases. Councillors should propose and discuss modifications to the core budget, not just the supplemental items. This way, the city budget will be a better reflection of the will of the voters, based on their choices of representatives.