The Kamloops Daily News has started a new community blog where community groups can post news and events. Looks like this could be quite useful.

I've been a little remiss on noting the entrance of some promising new social media offerings from the local media.

First, Doug Collins and James Peters are now publishing the text of their One Man's Opinion CFJC TV new segments on a blog. With comments! - so much better than talking to the TV.

Second, Radio NL has posted a podcast page. My favourite podcast offers segments of the Jim Harrison show with extended discussions on various issues of the day. I am not such a big fan of NL Editorials - which don't often make a lot of sense to me in content or tone. No comments here either.

In anticipation of tomorrow's public meeting hosted by the Kamloops Chamber of Commerce, Kamloops This Week's Jeremy Deutsch conducted this interview with ACC's Kim Sigurdson.

Funny how I first learned of it, but it happens more and more these days. I opened up my iphone twitter client last night. I've got a search set up for the word 'Kamloops' and up came three or four tweets from people who I don't know tweeting about the interview.

A couple of days ago, I had an interesting chat with one of the key organizers of the opposition to the ACC gasification proposal. This person was spitting mad at Daily News Editor Mel Rothenburger because of what was perceived to be Mel's attempt to cloak rabid support for the proposal in high minded appeals for fairness and rational decision making. That's what I took from the chat, in any case.

This is so interesting to me.

I should state up front that I have a huge respect for Mel. I think he was a great Mayor and that he is still one of the top 3 most influential people in Kamloops. When Mel writes, people are so used to reading and, more importantly, absorbing what he has to say. A negative review in the "armchair Mayor", and I've been associated and even the subject of a couple, is something to fear.

(By the way, Mel's column this week is on the upcoming Chamber sponsored public meeting on the ACC proposal.)

Mel's columns on ACC have made me believe that he does strongly support the project. To me, that's fair ball; as a columnist, you are supposed to be opinionated. I also feel, however, that he hasn't really come out and stated his support outright. This is likely just a style issue - also completely fair ball. But, I can understand why people think Mel is trying to be a little clever. They know how much influence Mel has but may also feel that an indirect writing style might be employed to get past people's questioning and skepticism muscles. If someone just states something outright, people perhaps tend to question it and engage with it more fully.

But, ultimately, who is responsible for questioning and engaging?

I personally think that we all need to read whatever we read with a questioning and skeptical eye. Mel's columns always make me think and question and that is hugely helpful.

Podcast - Melissa Lampman on Networked Journalism, Being a Reporter in Kamloops 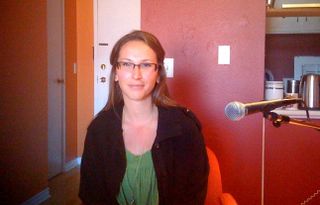 A trailblazer in using social media for news reporting in Kamloops, Melissa Lampman graduated from journalism school at TRU. Find her at Kamloops This Week Online or on twitter (@mlampy):

I was a little critical of a story written by CFJC's James Peters a couple of weeks ago. I didn't know James wrote it when I wrote my post, and I am really honoured he would spend some time commenting and standing up for his piece.

James and I have a bit of a history. I rented him and his wife their first residence in Kamloops. They were good tenants who have since moved on to be homeowners.

I like that James not only does very good traditional journalism, he also understands the new world of social media. I'm talking about more the ethic, and less the technology. Behind a lot of blogs, are people who want to start and carry on a conversation.

I still think the story that I criticized was worthy of criticism, but I'm really thankful James took the time to state his thoughts. It makes me work harder to try to understand his point of view, and raise my already high estimation of CFJC.

When I comment critically, I always hope it to be constructive, and in the spirit of conversation.

James in emblematic of a Kamloops media corps who are starting to get the world of social media.

I am a little surprised by the  CFJC-TV "spin" put on Domtar's desire for an extension on their particulate permit. I'm happy to hear about the public open house, but the amount of faith suggested by the headline is a bit much, in my view.

From the CFJC-TV web site:

Kamloops This Week profiles the success of the Kamloops RCMP prolific offender program which has greatly reduced local crime. I was waiting for a local paper to tell this story, and Kamloops This Week's community news format is an almost perfect vehicle.

Sad to hear that the paper is shutting down it Sunday edition.

Responding to Jim Harrison on the Environment

If you want an interesting ( I hope) 3 minute or so listen, I mashed up this Jim Harrison editorial where he sets up what I believe to be a false conflict between the economy and the environment.

I wonder if Michele Young told Kamloops Inside Out it was "off the record"...

Interesting situation with a story in the Kamloops Daily News about unusable basketball hoops at the Tournament Capital Centre. The story was by Michele Young - Hi Michele!

Donald, from Kamloops Inside Out, had written about the same said hoops the week before. He went down to the Daily News office, talked to Michele, and then wrote a post entitled "We Were the Source for the Kamloops Daily News"

Michele commented on the post. Kudo to her for that, even if I think the tone of your comment, Michele, is a bit snarky. I just love your opening line though:

Now, it it just me, or is a reporter mouthing those words to a blogger just a little too funny?