Dr Kathleen Scherf Statement on Her Termination as TRU President...

From the Kamloops Daily News and Kamloops This Week:

Thank you for all your interest. Just to ensure that everyone is working with the same and accurate information from my point of view, I’d like to respond to your interest via a statement. Please respect this will be my only official response at this time, and note that I am not responsible for any other statements that may have been attributed to me.

First, I would like to thank everyone at TRU and in the Kamloops community for their support. I loved the year I was privileged to serve at TRU’s helm.

Although I was surprised by the decision, I respect that the TRU Board of Governors has the right to terminate without just cause — Presidents serve at the pleasure of the Board, and this is regular university governance.

Under my leadership, TRU engaged in a sweeping restructuring and alignment project, passed with 86 per cent approval at the Senate, and then unanimously by the Board. As well, we broke all previous campus United Way campaigns, raising just short of $64,000. During my time, TRU’s fundraising activities increased 342 per cent from the 12 months previous. And finally, we were able to bring the first new Canadian law school in 35 years to TRU. There were other successes, but for me, these are the highlights.

One person does not accomplish such things alone; I want to thank my team members for all their work. I remain a TRU supporter and will watch with great interest as the university continues to grow and to succeed.

I Hope Kathleen Scherf Will Stay in Kamloops...

Dr Kathleen Scherf was basically fired today as President of Thompson Rivers University, after her one year review by the TRU Board of Governors.

I know Kathleen had mixed reviews as TRU President. Her flamboyance, for example, sometimes led people to conclude that she was not serious. But, as Kathleen told me when I interviewed her in this podcast, she can only be who she is.

I don't know Kathleen well, but my interview with her kind of made me a fan. She knew her stuff, and took her "unusualness" as a source of power. I really hope she decides to stay in Kamloops, where I think she could make an enormous contribution.

I know the TRU Board made their difficult decision carefully. Perhaps being a University President is not the right place for her in Kamloops     but I think there are many other ways to make a difference (just ask a recently defeated former city councillor!).

Here are audio snippets from my conversation with Kathleen  - talking about her "unusualness" in kind of an unusual, I would say refreshing, way: 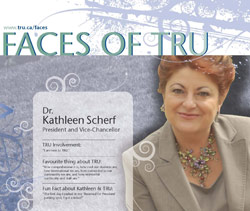 I was honoured that Kathleen Scherf, TRU's new President, took the time to have this conversation with me about our amazing university. We talk about Kathleen's background, the nature of a TRU education, and also about her experiences managing a large, diverse, rapidly changing institution.

Here is a roadmap for the audio:

01:08 - how did you get interested in teaching and academia
02:46 - How did you become a Frankenstein scholar
07:55 - How did you get  into university administration
10:05 - Tribute to Roger Barnsley
11:14 - Changing the Culture of TRU
11:58 - How did you find about TRU President Opening and fall
in love with TRU
13:34 - breaking the mold of a University President a bit
14:28 - the mom car, the parking ticket on the first day
16:43 - has been kind of unusual been a challenge, being who
you are and trying to being a role model
19:05 - what makes a TRU education special - your vision?
21:23 - small classes and large classes
23:13 - value of President teaching first year students
25:54 - how do liberal arts students become financially
independent?
27:45 - a  comprehensive university preparing students well
28:34 - Law School update
33:54 - House of Learning update, other capital projects - Old
Main repairs
36:17 -  Managing a large, diverse, rapidly changing institution:
collegial governance, transparent leadership,
team concept

Yesterday, I had the great honour of being invited to the TRU Africa Day put on by the TRU Afro Club. These talented students shared African culture with us through music, dance, poetry, lectures, and fashion. Having traveled and worked in Africa, I felt a little homesick for this incredible continent - the birthplace of our species.